“There's a whole lot of Feeney's in Ireland and abroad and they claim to not be related...but what if they are?” 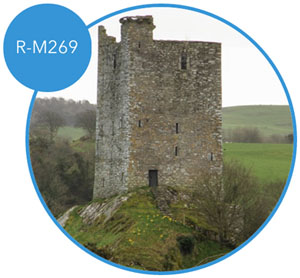 The latest trend in genealogy is DNA research. It is possible to find "genetic cousins" using this method: people with the same or close enough genetic markers to indicate a common ancestor, even though they don't have any written records proving it to be so.

Lucky for us Feeney's, we all share ancestral relatives in the Kings of Connact. In 2006, Trinity College of Dublin released the results of a DNA study of Irish men. They found that a certain pattern of markers was common in Northwest Ireland and in surnames associated with the O'Neill sept, the sept who claims to be descended from Niall of the Nine Hostages, half-brother of Fiachrae, our own sept's claim to the kingdom. It was postulated that this could be due to "The Genghis Khan Effect", where a powerful ruler leaves a legacy of many thousands of descendants because of his many sons.

For many, including all of the news sources who picked up the story, this progenitor could be no other than Niall. However based on the genetic information, it's more likely that the common ancestor lived about 3,400 years ago, twice as long ago as Niall lived. Although we can't test Niall's DNA today, it's likely he belonged to this genetic group even if he wasn't the founder.

Note: The International Society of Genetic Genealogy revised the naming scheme of paternal (Y-chromosome) haplogroups in 2016. The genetic group associated with Niall, formerly R1b1c7, is now known as R-M269. The ySearch service linked to below is no longer maintained. For cross-service relative search, the new place to upload your raw DNA is GEDmatch Genesis.

For the sake of simplicity since we don't have accurate records that far back, we will call our common ancestor Niall to keep in step with the Trinity study. According to the study, there could be as many as 3 million descendents of Niall alive today. In Northwest Ireland, roughly 1 in 5 men share Niall's Y-chromosome, in the whole of Ireland roughly 1 in 12. In Western and Central Scotland, 1 in 10 men carry the gene, and 2% of European American New Yorkers carry it as well due to Irish emigration.

I received an e-mail from a Michael Feeney, who's father and grandfather and so on were also named Michael (just as mine were named James). He reports that he took the DNA test at Family Tree DNA and was told that he had matching DNA with Niall at a genetic distance of 5. He was placed in the R1b1c7 haplogroup. He joins me in encouraging all Feeney's to take a DNA test and send in your results. I'll post updates here as people send these in.

Tim McEvoy wrote in to encourage Feeney males to test their Y-chromosome DNA. He has a group on Family Tree DNA, Sons of Aodh, who believe haplogroup R-FGC23742 indicates being descended from the Uí Fiachrach line.

The author's paternal haplogroup is I-M438.