“There's a whole lot of Feeney's in Ireland and abroad and they claim to not be related...but what if they are?”

The Feeney surname is traditionally associated with the province of Connacht, in particular the counties of Sligo, Mayo, Galway and Roscommon. The Finney variant is associated with the province of Ulster to the north. It is taken from the Gaelic Ó Fiannaidhe, earlier form Ó Feinneadha, which can be translated as soldier or warrior with warrior reflecting the meaning more closely. The Gaelic term is now abbreviated as Ó Fianna, which some associate with the Na Fianna who in Celtic mythology were a band of warriors formed to protect Ireland. Since the 1850s the term ("Fenian" in English) has been associated with Irish nationalists after a Celtic scholar named his revolutionary secret society the Fenian Brotherhood in honor of the Fianna. The Feeney's in Co. Galway and Co. Roscommon spell their name Ó Fidhne in Gaelic, which likely derives from Ó Fighne as mentioned in the "Annals of Connacht." There is a townland in Co. Roscommon known as Ballyfeeny where a good concentration of this sept is located. 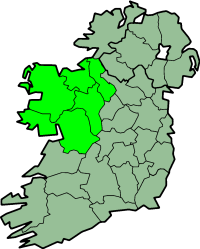 The Feeney family is a sept of the Uí Fiachrach dynasty who originated in, and whose descendants later ruled, the Connacht province at various times from around 500 A.D. onwards. The Uí Fiachrach claimed descent from Fiachrae, an older half-brother of Niall Nigiallach, a High King of Ireland from about 350-405 A.D. Fiachrae and his two full brothers, Brion and Ailill, were the collective ancestors of the Connachta dynasty that eventually became the name of the province. The Uí Fiachrach separated into two branches, the Uí Fiachrach Aidhne and the Uí Fiachrach Muaidhe, the Aidhne taking the south (Co. Galway and Co. Roscommon) and the Muaidhe taking the north (Co. Sligo and Co. Mayo). Thus the Feeney's of these four counties are likely related but on two distinct branches of the tree based on geography, barring any major migration in and amongst the septs. This could explain the differences in the Gaelic versions of their names.

The evolution of the spelling of the surname can be placed along a timeline. Feeney was the most popular spelling of the name in the 1890 index, with some 46 births recorded in Sligo, Mayo and Galway. In contrast, "Feeny" had just 26 births in the counties of Galway and Roscommon that year. Going back in time, the 1857 Griffith Valuation for Dromore West (Co. Sligo) listed those children's grandfathers as all spelling their name "Feeny." Further back in time we find six family members spelling their name "O'Feeny" in the Barony of Tireril (Co. Sligo) in the 1659 census return, with no other variations listed.

Localizing the Feeney's still in Ireland, Ned Cully writes, “if you went out the coast road from Galway city approx 8 miles to Furbo and for the next 15 miles to Tully Cross every third house would be a Feeney house ... there are simply scads of them there and most claim not to be related to their neighbors (folks across the road) but they're all related if you go back 3, 4, or 5 generations.” There is also a traditionally large concentration in the parish of Easkey in Co. Sligo, as related by Edward MacLysaught in More Irish Families.

In early Ireland, fianna (singular fian) were small, semi-independent warrior bands who lived apart from society in the forests as mercenaries, bandits and hunters, but could be called upon by kings in times of war. They appear in Irish mythology, most notably in the stories of the Fenian Cycle, where they are led by Fionn mac Cumhaill.

The historical institution of the fian is known from references in early medieval Irish law tracts. A fian was made up of landless young men, often young aristocrats who had not yet come into their inheritance of land. A member of a fian was called a fénnid; the leader of a fian was a rígfénnid (literally "king-fénnid"). Geoffrey Keating, in his 17th century History of Ireland, says that during the winter the fianna were quartered and fed by the nobility, during which time they would keep order on their behalf, but during the summer, from Beltaine to Samhain, they were obliged to live by hunting for food and for pelts to sell. Keating's History is more a compilation of traditions than a reliable history, but in this case scholars point to references in early Irish poetry and the existence of a closed hunting season for deer and wild boar between Samhain and Beltaine in medieval Scotland as corroboration.

Some legendary depictions of fianna seem to conform to this historical reality: for example, in the Ulster Cycle the druid Cathbad leads a fian of twenty-seven men which fights against other fianna and kills the twelve foster-fathers of the Ulster princess Ness. Ness, in response, leads her own fian of twenty-seven in pursuit of Cathbad.

However, the stories of the Fenian Cycle, set around the time of Cormac mac Airt, depict the fianna as a single standing army in the service of the High King, although it contains two rival factions, the Clann Baíscne of Leinster, led by Fionn mac Cumhaill, and the Clann Morna of Connacht, led by Goll mac Morna, and lives apart from society, surving by hunting.

Membership was subject to rigorous tests. In one such test the applicant would stand in a waist-deep hole armed with a shield while nine warriors threw spears at him; if he was wounded, he failed. In another his hair would be braided, and he would be pursued through the forest; he would fail if he was caught, if a branch cracked under his feet, or if the braids in his hair were disturbed. He would have to be able to leap over a branch the height of his forehead, pass under one as low as his knee, and pull a thorn from his foot without slowing down. He also needed to be a skilled poet.

A dinnseanchas poem, Ard Ruide ("Ruide Headland"), poetically describes the kingdoms of Ireland that the Feeney clan belongs to. As the Feeney's originate from the borderland between the two kingdoms, an area known as bréifne, one can imagine the ancient Feeney's being a mix of the descriptions of the people in each. Below is a translation from Old Irish:

“Connacht in the west is the kingdom of learning, the seat of the greatest and wisest druids and magicians; the men of Connacht are famed for their eloquence, their handsomeness and their ability to pronounce true judgement.

“Ulster in the north is the seat of battle valour, of haughtiness, strife, boasting; the men of Ulster are the fiercest warriors of all Ireland, and the queens and goddesses of Ulster are associated with battle and death.” 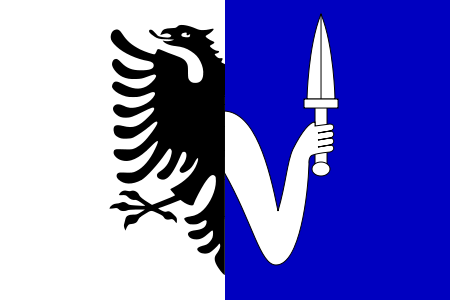 There have been a few versions of the Sligo/Mayo (Uí Fiachrach Muaidhe) Feeney crest which have surfaced, but most widely agreed upon version is based on a pattern of three fleur-de-lis. Many Feeney's point to this as a long-forgotten connection to France, but it may also symbolize the family's connection to the Catholic faith. The Church has ascribed the lily as the special emblem of the Virgin Mary, and due to its three "petals" the fleur-de-lis has sometimes been used to represent the Holy Trinity. Da Vinci Code fans insert your favorite Mary Magdalen conspiracy theory here. Although the most popular of the crests appears to show three escallop shells, they are recognized by the family as stylistic fleur-de-lis. 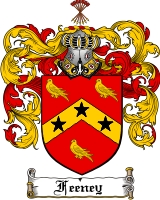 The origin of the crest with birds is unknown: "A red shield with three black mullets on a gold chevron, between three gold martletts." Martlets are English in origin, only appearing in Ireland on the eastern coast - far from the seat of the Feeney's. It may be an error based on the Galway/Roscommon (Uí Fiachrach Aidhne) Feeney crest, which displays a gold cross on a red background.

Ever faithful to the Catholic Church, we believe in loving one another and respecting each other’s space. We believe in respecting other people’s beliefs when they differ from ours and in mediation for problems, not hate nor violence. We believe in charity and the importance of sharing our good fortune with others. We are gracious for the blessings which have been bestowed upon us and will use our God-given abilities to the fullest.